I don't even watch Dr. Who, oops, I mean Doctor Who (my daughter corrected me).  Actually, I've seen a few shows, but it is my daughter (the fourth one) that has watched several episodes, several hundred episodes.  There are like thousands??? of episodes of Doctor Who since he has been going strong for half a century.

I just don't get it, but there are so many that do 'get it' and love, or rather LOVE Doctor Who.

So this post is dedicated to all those out there that are Doctor Who fans (including my daughter).

You would be shocked at how many trial and errors I went through with this project.  You would be even more shocked to know how many hours were spent on this project, so I won't tell you (but it was lots and lots).

Let me warn you, I would not consider this a beginner project.  It's isn't hard, there just isn't much of a repeating pattern to crochet mindlessly while you watch TV (specifically Dr., oops again, Doctor Whatever Who!!!).

The instructions to make this crocheted Tardis are in a 3 part video.

Here's part one of how to crochet a Tardis:

Here's part two of how to crochet a Tardis:

And last, but not least, here's part three of how to crochet a Tardis:

The finished Tardis measured about 6" tall and you can put all your Doctor Who memorabilia inside the Tardis as the doors are not crocheted shut. 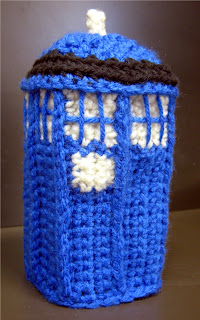 Time and Relative Dimension in Space 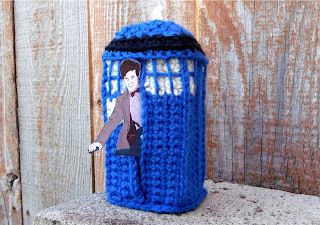 All righty, that enough of Doctor Who and Tardis's.  The next crochet video I do will be something normal like R2D2 from Star Wars -- just kidding!
at 7:49 PM No comments: