Let's see picking up from last week's crochet instructions . . .
Now you work 24 double crochets in the next 6-9 rows depending on the size/length of your foot. 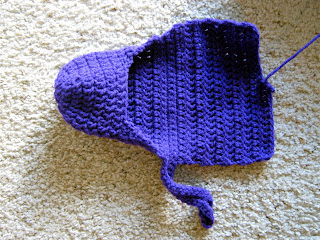 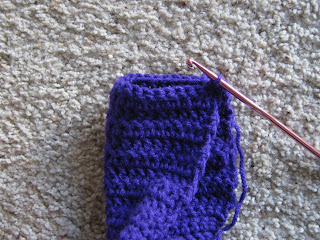 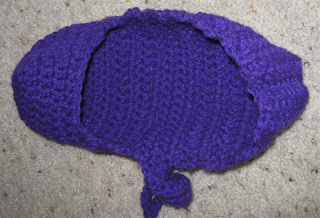 Next, single crochet around the top edges and strap of the slipper to tidy up the edges. 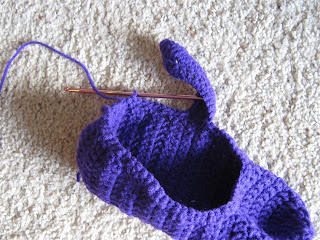 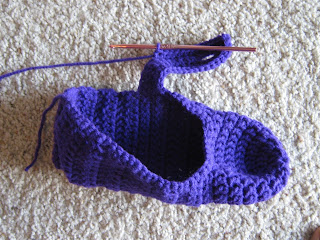 I started this single crochet at the back of the slipper, then I went all around and tied it off in a tight knot.  Weave in the yarn ends. 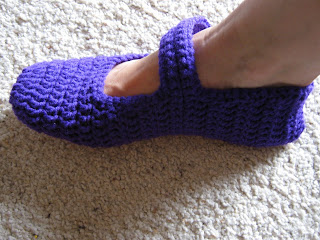 It’s Monday, the beginning of the work week.
Have you ever desired to have a job that you loved so much that taking a break for lunch was an irritation because you didn’t want to stop working? Okay, I love food, I can’t imagine it being an irritation, so let’s just say you were anxious to get back to your work after lunch, because you really enjoyed your work.


I love making crafty things and I like drawing and painting. I would love to do crafts as a full time job and get wealthy doing it. I have tried many different things to make it work and I have made money at most of them. But, when adding up the cost of materials and time invested in the crafts, I actually made very little money.


I just want to be wealthy, doing what I love, while being a stay at home mom. Is that too much to ask???


Well, back in May, my oldest daughter suggested I start a blog. I guess Oprah had a guest that made big money with her blog. So here is first of my true confessions: I started this blog for the sole intention of reaching my dream of making money while staying at home. As you can guess, I haven’t made any money on this blog and I keep on doing it because it’s addicting, I suppose.

There are many things I can do to earn a minimal income and subsist. But, I do not want to just subsist, I want to achieve my dreams.


Then a few months ago I heard little snippets (from a friend of mine) about making money using this special debit card and I wanted to be a part of it. Then I watched a couple of videos about it with my husband ( http://wakeupcall.wakeupnow.com/ ). He joined immediately. That was 2 ½ months ago.


I am so anxious to join too, now that life is more settled and the kids are back in school. I get more excited about it as I learn more about the company.


The company is pictured on the left side of the blog. It is called “Wake Up Now”.  I’ve finally found an opportunity that has the potential to get me where I want to be financially, and helps me in many other ways too.

Who wants the best for their family, such as good health, wholesome food, learning, and recreation?

Who wants more freedom from government controls and bureaucracy?

Who wants to help others, spread goodness, and down home values?

I’m going to publically express my desires and use “the law of attraction” and see what happens.


I want seven to 21 people to join up with me and we can achieve our hopes and dreams and share our joys among us all. Have you heard of Napolean Hill’s, Mastermind group? We could have our own mastermind group. We can radiate positive, powerful, goodness to the world (that’d be extremely amazing)!


I’d want this wonderful group to grow in wealth and friendship (kindred spirits as Anne Shirley would say from Anne of Green Gables).


We can all be wealth building buddies!!! 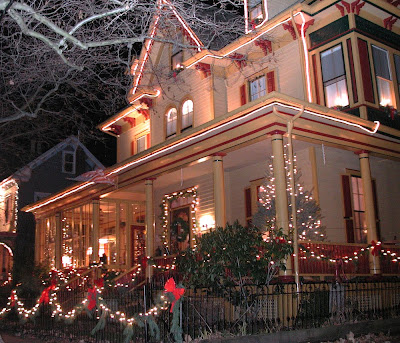 This, surrounded by an acre or two for veggie and flower gardens and an orchard would be nice, yes?
at 7:03 PM 4 comments:

I baked cookies this morning.  For those that know me well, you know that I hate anything to be wasted.  Well, I had a couple of old chocolate candy bars in my cupboard and instead of throwing them away, I chopped them up along with some old white chocolate and made chocolate chip cookies with it. 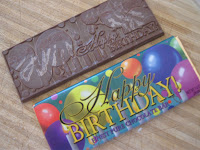 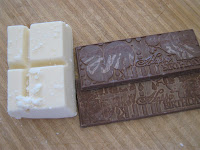 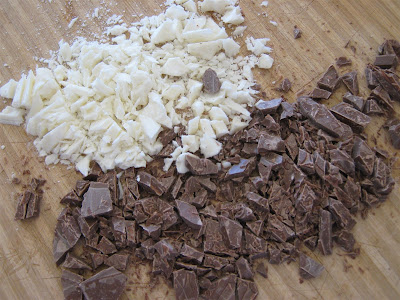 According to my 4th oldest daughter, (who is the only one that knows about them so far), they are delicious!!!

I also have a hard time following a recipe and following exact measurements.  So, I'll just list what I put in them:
Bake 350 for 10 minutes. 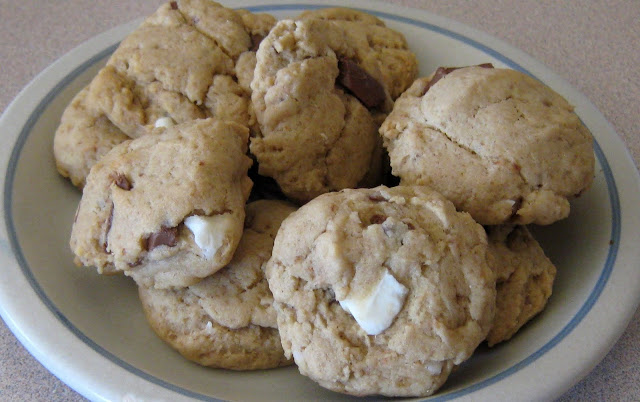 Now that the cookies are done, here is the latest on the slipper project . . . 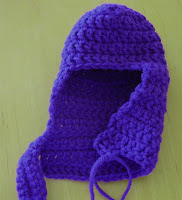 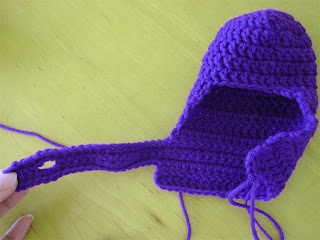 Maybe, I'll get back into the swing of blogging more regularly again now that all the back to school routines have set in.
I wish there were more time to do the blog the way I want to, but after listening to a talk by Julie Beck at conference last Sunday, I've decided to put a limit on the hours I will spend at the computer.  This will be good, I will get to know my children again.
So with more balance in my life, this slipper project may take up several blog posts, but hey, at least we will get it started today.


Here are some of my experimental slippers: 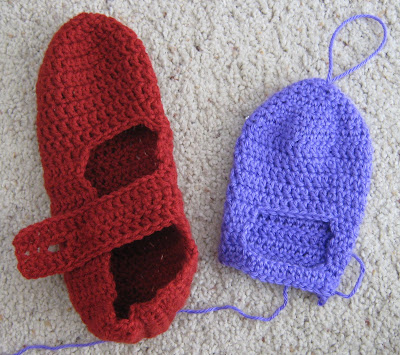 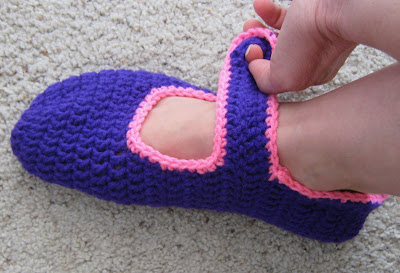 These are going to be Christmas presents to all my daughters this year (if I get them started and done!)
I still have some refining to do.  I will sew a big, cute, button on the side -- my finger is poking out of the buttonhole.
Here is a youtube video showing how to start the slipper with a magic ring.  I like using the magic ring to start rounds that you don't want  a hole in.  Since I don't want a hole in the top of my slippers the magic ring is best (instead of chaining a ring).
I didn't do this video and it doesn't have any sound.  But I like it because she crochets very slowly, so it is easier to follow.  For child size slippers I start with single crochets in the ring and for adult sized slippers I do double crochets in the ring like the last half of the video shows.

Okay, that is it for today, I will continue these instructions as I get them written down after crocheting another slipper!
at 1:04 PM 2 comments:

The following is a piece written by Jared Law.  I agree with most of it.  The part I don't agree with is I think that most people on unemployment are working hard to find work.  I wish there were some honest statistics on how many people are on unemployment or welfare or any government program that are really just slothful.  I hope and assume most of the people are desiring and looking diligently for work.  I know for myself in this recession finding work is very difficult.
Okay enough from me, here is the article from Jared Law:


As the Apostle Paul says, in the tenth verse of THE SECOND EPISTLE OF PAUL THE APOSTLE TO THE THESSALONIANS:10 For even when we were with you, this we commanded you, that if any would not work, neither should he eat.

This is Christian Doctrine, and it is part of our shared American heritage. It is a small slice of what made America great. This is how our Founding Fathers lived, it's what they believed, and they would be horrified to see how dependent Americans are on their massive, oppressive government.

The truth is that government programs are NOT compassionate. Quite the opposite...government programs are, in fact, tyrannical. When a government takes from you (by force) and "redistributes" your hard-earned money to those who refuse to work for their own support, that is pure tyranny, and such is immoral, even evil.
On the other hand, it IS compassionate for YOU, by your own FREE WILL & CHOICE, to willingly give support: directly, or through your church/charity, to those who actually NEED it. Whether it's a family going through rough times, or a true disability, when donations are VOLUNTARY, and without COMPULSION, that's COMPASSIONATE. Compassion REQUIRES FREE AGENCY. Without that freedom to choose, so-called "compassion" is merely a euphemism for tyranny, and a tool of the adversary, the enemy of that is good and fair. When we are FORCED, whether it's at the point of a thug's gun on the street, or through a punitive tax code, backed up by local law enforcement (if you stop paying taxes, eventually men with guns will oblige you to leave your home so they can sell it to pay what the law, however immoral, insists that you owe), it's just plain tyranny, and that's just plain wrong.

In fact, In My Humble Opinion (IMHO), FEDERAL Taxes of any kind should only be used for those things which are authorized by Article One, Section Eight, of the Constitution of the United States of America, including national defense. NOTHING ELSE. It's up to the STATES to do anything else. Personally, I would prefer it if we ONLY paid taxes to our respective states, and let the states pay for the Federal Government's needs...imagine keeping control of the flow of taxpayer dollars local, where you can actually affect it...and imagine no more Tax Day, no more EPA, HHS, IRS, HUD, ED, ATF, SSA, TVA, etc.

So in closing, we need to make sure we clarify that it is NOT compassionate for the GOVERNMENT to render regular, scheduled aid to anybody. That's the domain of private churches & charities. While [Christians, Jews, and adherents to most major world religions] have a MORAL obligation to VOLUNTARILY donate to such causes, there is, and never should be, any LEGAL OBLIGATION in our Constitutional Republic. To require such is unconstitutional at best! Our current tax & spend government and COMPULSORY taxpayer funding of "programs" which redistribute the incomes of working Americans is IMMORAL, IMHO. And it began to be wildly tyrannical/immoral in the early 20th Century, thanks to so-called "Progressives" such as Woodrow Wilson & Franklin Delano Roosevelt (FDR), the two worst American Tyrants of the 20th Century."