I feel passionately about what is happening in our wonderful country.  That is why I'm dedicating Tuesday posts to "America the Beautiful".
The following is an excerpt or paraphrasing W. Cleon Skousen from his book The Making of America and current Congressman Jason Chaffetz.
Our politicians in the past have gradually drifted away from the Founding Fathers' original success formula which is the Constitution of the United States. Our current politicians are not gradually drifting away from the constitution, they are shredding it.
Here is a review of what the Founding Fathers' did for us: 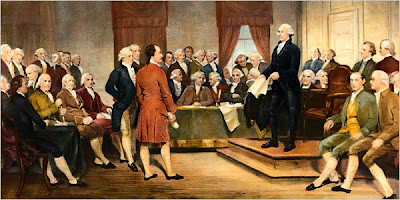 It would be a disastrous loss to all humanity if these great principles were allowed to become lost.  Our current public policies support dependence, they punish industry, they redistribute wealth and limit freedom.  We have higher taxes, Czars, corporate bailouts, and a national debt that has gone crazy in the last year and a half.

We now need to work toward (and make sure our own politicians - who are working for us - are working toward) fiscal discipline, limited government, accountability, and a strong national defense. The United States of America is the greatest country on Earth, but we must now take action to preserve our liberties, our freedom, and our Constitution.

What you think about our country? I'd love to hear about your thoughts.