The 4th of July

Last week me and my hubby watched a movie called "Taking Chance".  It is inspired by a true story of the United States Marine who volunteered to escort the remains of a nineteen year old soldier who was killed in Iraq, to his small hometown in remote Wyoming. Lance Corporal Chance Phelps (USMC) was just nineteen years old when he was killed during active duty. Now, as Lance Corporal Phelps is prepared for his final journey back home, Lieutenant Colonel Michael Strobl (USMC) (played by Kevin Bacon) makes it his personal mission to ensure that his fallen brother is laid to rest with the proper respect. As the journey begins, Lieutenant Colonel Strobl gains a greater appreciation of the sacrifices made in war than ever before. ~ (Write up by Jason Buchanan, All Movie Guide) 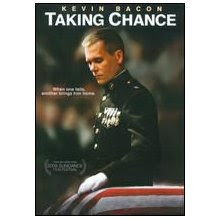 I recommend watching this movie as the 4th of  July approaches.  It brings back to home what the holiday is about.

Then, coincidentally, me and my hubby and my 2 step-sons went to a Patriotic fireside-program on Sunday evening.  It was a lump in the throat experience as former football star, Steve Young, introduced Senior Airman Michael Malarsie, who was injured in Afghanistan in early January.
Here is a quote from yesterday's newspaper article about the evening:
"Malarsie joined Young at the podium and talked about losing his comrades as well as his eyesight to an IED blast. His voice caught as he recounted the loss, but his gratitude was genuine as he thanked the friends and strangers that held him up. 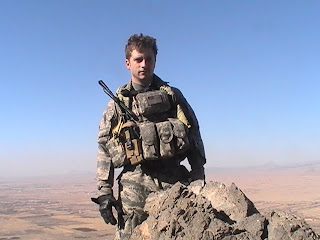 "I would not change a single thing," Malarsie said, noting that it was even through the accident that he met Jesse, his wife of two days. The audience stood to salute the soldier as he shuffled with a walking cane back to his seat. Young then closed with the question: "How will each of us, in the privacy of our own hearts and own souls, answer the question, 'How am I going to treat those around me?' "

Later in the program, two young men were honored:

A flag folding ceremony was performed and the two flags were given to the mothers of the brave fallen servicemen,  Lance Cpl. Nigel K. Olsen and Lance Cpl. Carlos A. Aragon.

My heart aches for these mothers.  I honor them and their sons.  They have been on my mind and in my heart constantly since Sunday night.  I hope I don't ever forget them for the great sacrifices they have made.
They represent what the 4th of July is all about.
So many great men (and of course their mothers) have made ultimate sacrifices for our free country.  Let's pray to God that we will do all we can to keep it that way.


FREEDOM, LIBERTY, and the Pursuit of HAPPINESS