A Busy Day and Peach Crisp

Yesterday was soooo busy.  I spent almost the whole day in the kitchen making food I've never made before.  Then after my daughter and her family arrived and we were eating dinner, my son-in-law said it was the best meal he has had all year (I don't think my daughter appreciated that comment, but I was quite complimented!), and then he asked me if I was going to put it on my blog.

Well, amateur blogger that I am, it didn't occur to me that I should have taken pictures of everything I was doing yesterday to put on this blog!!!  Afterward, I could have kicked myself, especially since everything turned out really good.  I'll give you a run down:  first I made a summer salad that I had at a friend's house and loved (I took a picture of it after my son-in-laws blog comment).  So here's is what it looks like . . . 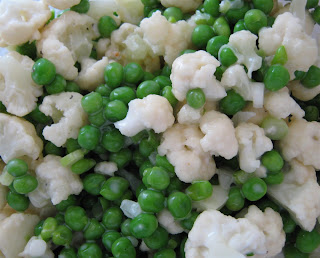 It's made with petite peas, small pieces of cauliflower, green onions, and a mayonnaise dressing (mayonnaise, milk, garlic powder, season salt, pepper).
Then I made the same cold salad with just broccoli because my hubby doesn't like cauliflower or peas.  I just used the very tips of the broccoli flowerets so I had 4 bare broccoli trees sitting on my counter (I wish I had taken a picture of this cuz' they were so cool looking. Hubby said if we were tiny, it'd be fun to have a tree house in one of them).  Anyway, I couldn't throw all that away so I went online and found a recipe for peeled broccoli stems (julienne cut) and carrots (julienne cut).  It took forever to peel the outer skin off all those broccoli stems (another thing I wish I had photographed, but I did get a picture of all the work once I was done).  Here's the pic . . . 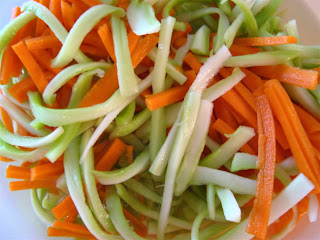 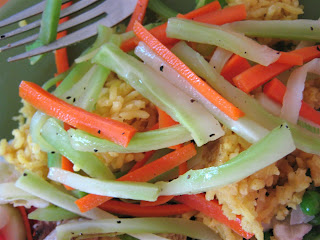 I also made buckwheat rolls.  All of these foods were things I had never done before.  I was  glad it was so dang good.  Except, I didn't like the buckwheat rolls so much, I've decided I'm not a buckwheat kind of gal.  Everyone else really liked them, especiallly my hubby who refused to try the cauliflower salad.
Last, but not least, I made a peach crisp for dessert, which I did photograph because it was my intention to put it on today's post. 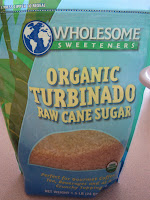 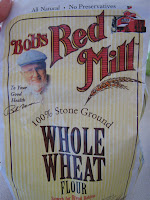 As some may know, I've been trying to cut out white sugar and white flour.  So this is what I used instead.  You can use any sugar (white, brown, or honey)  and flour (white or wheat) you want in this peach crisp recipe. 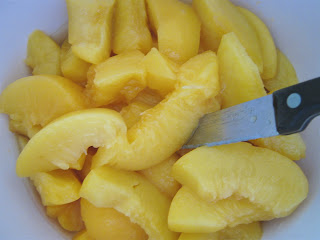 Slice peaches into bowl.  I don't have fresh peaches yet, so I used 2 (1 LB 13 OZ) cans of peaches. Reserve some of the juice. 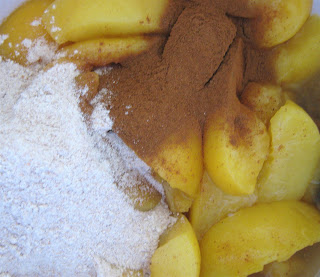 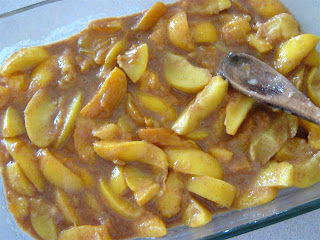 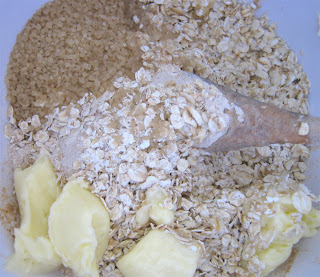 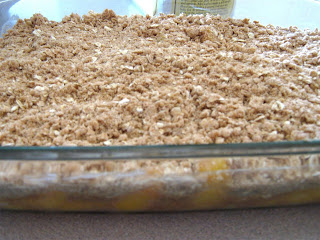 Mix and spread over peaches, then bake at 350 for 30 minutes. 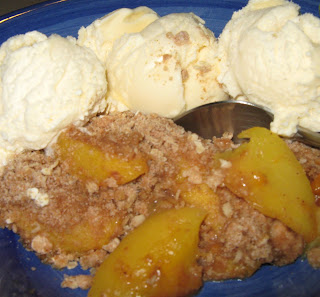 The vote was split, my daughter and my hubby like peach crisp best cold with ice cream  . . . 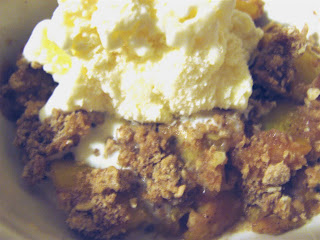 but me and my son-in-law like it best hot with vanilla cream on top as the ice cream melts!!!
Yum!!!
Which are you, cold or hot!?!
A side note - I didn't get pictures posted of my granddaughters and the hairbands because the ones I made are too small.  In fact, I discovered a few changes I want to make.  So, I'm back to crocheting again and will probably do another video when I get the hairband exactly like I want it.
at 12:34 PM