In thinking about what to fix for dinner tonight, anything with spicy sausage sounded good, so I came up with a toss between a jambalaya recipe and taco salad.
This un-named dish is the result, and boy it is good!

First of all jambalaya has rice.  I just had rice the other night so I used pearl barley instead, but I'm getting ahead of myself.

The first thing I did was chop up some celery and onion, then I half cooked and drained the sausage, then I combined the celery, onion, and sausage and cooked it until the celery was tender and the sausage was fully cooked.  I added some salt, pepper, and garlic too.

Then I cooked the barley (al dente, because it will cook some more with the meat).  I used 2 c water, 1 c barley and a chicken bouillon cube.

Then I put the barley in with the meat mixture and added a can of stewed diced tomatoes, a can of corn, a half pkg of taco seasonings, and some brown sugar.  Let it simmer together for a few minutes. 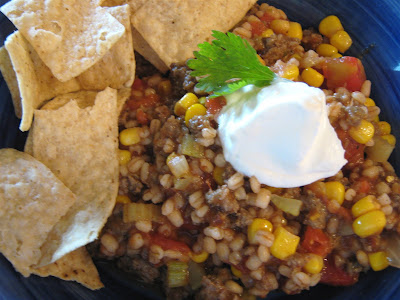 It can be served by itself, or with corn chips.  It can be topped with sour cream if you want and I know my hubby will also top it with cheese (I personally don't want the extra calories . . .).
Enjoy!!!
at 3:56 PM